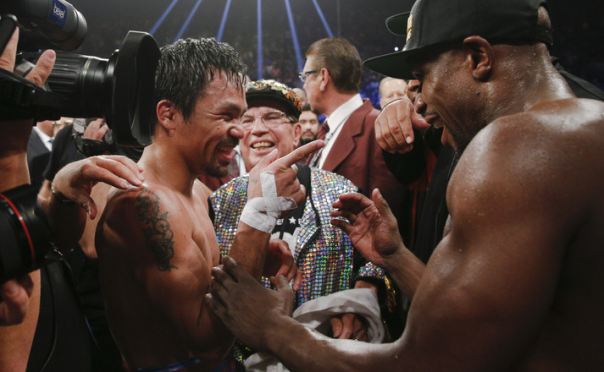 Floyd Mayweather bests Manny Pacquiao again – and for the second year in a row tops everybody on Forbes’ annual list of the 100 richest athletes in the world.

Mayweather made almost twice as much as Pacquiao in the past 12 months – both the only current nine-figure sportsmen in the world. Together, they brought in nearly half a billion dollars ($300M + $160M).

Tiger Woods is the third member of the nine-figure club – he earned $105 million back in 2010 before it all fell apart. Still, Woods ranks ninth today, raking in a “paltry” $50.6 million.

According to Forbes, “the blockbuster showdown between boxers Floyd Mayweather and Manny Pacquiao” had most to do with the two boxers’ earnings (duh) – and with the overall increase across the board for the top 100.

Mayweather earned nearly $180 million and Pacquiao $120 million for their May 2nd fight.

Cristiano Ronaldo and Lionel Messi are next on the list. World football has the most members of the top 20, along with NBA Basketball, tied with four apiece.

Any MLB Baseball? Why, yes. What? Jon Lester is the highest paid player in the game.

For a look at all 100 rankers and their salary/endorsements splits, check out Forbes’ spread, here.

Floyd Mayweather, Jr. and the Best Boxers in the World (2015) 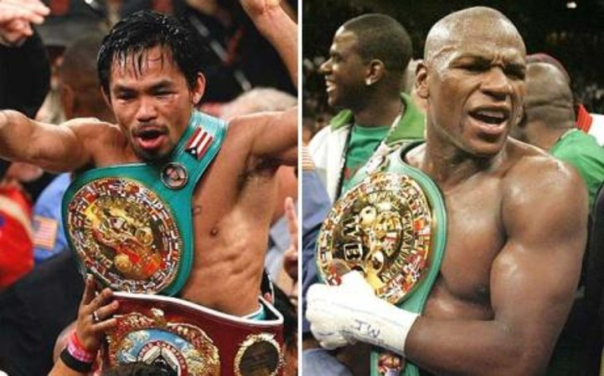 The Fight Of The Century: Manny Pacquiao Vs. Floyd Mayweather

Hard to believe. It’s the fifth go-round for Sports List of the Day‘s annual look at the best boxers in the world by weight class, courtesy boxrec.com.

Wladimir Klitschko maintains his hold on the heavyweight crown for the second year in a row, while a man much in the media lately, “Money” Floyd Mayweather, Jr., remains the best pound-for-pound boxer in the world for a fourth straight time.

The 63-3 Klitschko’s next fight will be April 25 against Bryant Jennings (19-0) at Madison Square Garden.

But, really, who cares too much about that? The most anticipated fight of the year, decade and probably this century is a week after that. In fact, the match is being called “The Fight of the Century.”

Be sure to check out boxrec.com for all your boxing info needs – current and historical – including the current top 25 pound-for-pound boxers in the world.

Floyd Mayweather, Jr. and the Best Boxers in the World 2014: No. 1 Rankings for Every Weight Class 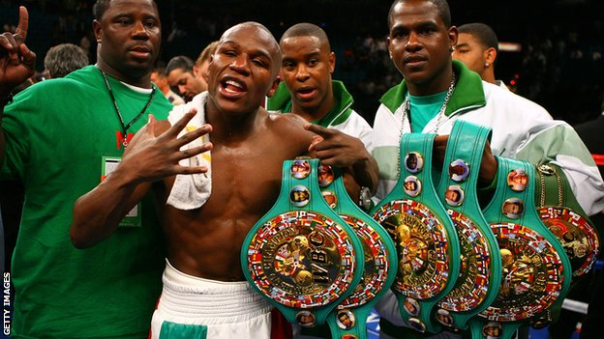 Floyd Mayweather, Jr., Still The Best In The World

Hard to believe, but it’s Sports List of the Day‘s 4th annual installment of the best boxers in the world, courtesy boxrec.com – the best boxing site on the Web. Thanks to all the sports fans out there who have kept both sites going!

The still-undefeated Floyd Mayweather (46-0) continues to be the best pound-for-pound boxer in the world. His media-nemesis (for they will never meet in the ring, it seems), Manny Pacquiao, clings to second-best.

Three Americans fell from last year’s list, but they have been replaced by three other Americans, maintaining the United States’ five-man presence (and leadership) amongst the rankings.

Japan comes in very strong in the lighter classes, including tops in four of the five lightest.